New advances in FSHD research | The Leaders in FSHD research Today!
On November 7 and 8, eighty scientists met in Boston, Massachusetts, to share the latest results from their research on facioscapulohumeral muscular dystrophy (FSHD). This conference is hosted annually by the American FSH Society. Andreas Leidenroth, a Muscular Dystrophy Campaign-funded PhD student researching FSHD in Nottingham, attended the conference and here he reports on two important highlights presented at the meeting.
The highlights mentioned by this researcher are those achieved by researchers Friends of FSH Research has worked closely with since 2006!
Read this report - Dr. Tapscott and the Seattle FSH Research group has worked in collaboration with the researchers in Leiden for many years.
Friends of FSH Research has held an annual FSH workshop bringing these groups together & urging strong collaborative efforts in order to speed up the progress of FSH research.
Make a donation to Friends of FSH Research Today!
It DOES make a difference.
Posted by fshfriends at 9:36 AM No comments:

Here is a personal look at Bill Moss - in his own words.
Mr. Moss has become a leader for those with FSH Muscular Dystrophy - putting his influence to help move this research forward worldwide.
Posted by fshfriends at 12:51 PM No comments: 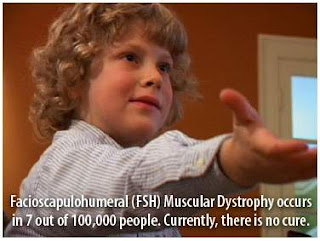 
Your past support has been critical to the stimulation of new interest in Facioscapulohumeral (FSH) research.  You have helped to attract research scientists and to fund novel FSH projects that have expanded the world's understanding of the mechanisms at work in this form of Muscular Dystrophy.

Our 8th annual charity gala is dedicated to YOU, our community.
The dinner and auction will be held at the Bellevue Hyatt on January 28th.  The theme of this year's gala, "With a Little Help from Our Friends," honors our community and its generous support.
We invite you to join with us as we celebrate our successes and your partnership.
Progress has been made!   We will need your continued support to achieve our next goal, the development of an effective therapy for FSH Muscular Dystrophy.
Posted by fshfriends at 1:32 PM No comments:

FSHD Europe: The European voice of people with FSHD

FSHD Europe: The European voice of people with FSHD
The European FSHD advocacy groups have joined together - here is their newly developed website.
We are pleased that the video Friends of FSH Research produced is presented on their learning about FSHD page.
Working together we will find a treatment or cure for FSHD.
Posted by fshfriends at 11:01 AM No comments:

This work was done by the group of Alexandra Belayew in Mons, Belgium, in collaboration with Dalila Laoudj-Chenivesse from Montpellier, France, and Professor Steve D. Wilton from Perth, Australia, who does much work with exon skipping in Duchenne. Muscle cells of healthy individuals cultured in the laboratory in which DUX4 was introduced were much thinner (atrophic) than muscle cells without active DUX4. (Such thin muscle cells are seen in FSHD.) A number of genes characteristic for the diseased muscle were also found to be activated (Atrogin1, MuRF1, CRYM and TP53). These genes may be used to measure the effect of drugs.

Next, the researcher developed siRNA molecules against DUX4 (these are molecules that cause degradation of the DUX4 messenger RNA so no more DUX4 protein is made). Muscle cells cultured in the laboratory with active DUX4 which were treated with this anti-DUX4 siRNA were less thin 8 days after treatment than untreated muscle cells. They made less DUX4 and TP53 proteins. Antisense Oligonucleotides (AOs) were then developed against DUX4. This is a different kind of anti-molecule which is used for exon skipping in Duchenne. Muscle cells from people with FSHD cultured in the laboratory and treated with a low concentration of anti-DUX4 AOs had less DUX4 and TP53, without much effect on DUX4c, a gene similar to DUX4 which probably has an important function in the human body.

The group of Alexandra Belayew and other research groups worldwide are now working on developing DUX4 mouse models to test whether these anti-DUX4 molecules can slow, stop or hopefully even improve the health of diseased animals.

Click on "PLOS ONE" to read complete study report

Posted by fshfriends at 11:42 AM No comments:

Thank You for Being a Friend 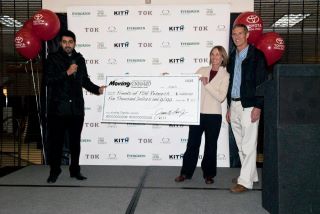 After tough voting in a facebook contest, our charity Friends of FSH Research won $5,000 from the Toyota of Kirkland dealership. Thanks to all the voters that took the time to “like” our charity, we were the top vote getters and the winners of this grant from Toyota.
Our charity auction’s theme this year is “With a Little Help from Our Friends.” Though it might be a song with some questionable references, for us it is a song that celebrates friends. It has taken the support of many friends to push our mission forward toward finding a treatment or cure for FSH Muscular Dystrophy. And now, our circle of friends just got bigger – thank you Toyota of Kirkland for being a friend!
Posted by fshfriends at 8:27 PM No comments: