The Beginning of Something New in FSHD Research? 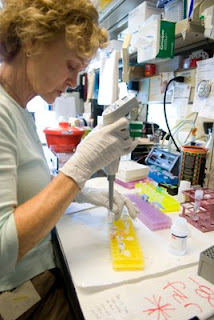 Research on the cause and treatment of facioscapulohumeral muscular dystrophy (FSHD) might be entering a new, and hopefully better, era. For many years FSHD has been a difficult disease for medical researchers to study. In most genetic diseases, a gene with some known function is mutated and no longer performs its normal biological role. To find a treatment for such a disease, the medical researcher needs to identify therapeutic interventions that will compensate for the mutant gene. In contrast, FSHD removes a region of DNA with no known function, and, to make it yet more complicated, nearly identical copies of this region remain elsewhere in the genome. Although several researchers have proposed logical models of how the FSHD mutation might cause disease, there has not been strong experimental evidence to support any single model. This resulted in a lack of scientific consensus and, because scientific review committees rely on consensus, translated into difficulty competing for scarce research dollars.

Although it remains too early to claim that a new consensus is forming in the FSHD research community, there is now reason to hope that this is the case. Several publications have resurrected a hypothesis regarding the cause of FSHD that was originally suggested many years ago but largely abandoned because of the lack of experimental support. The hypothesis is that the region of DNA removed in the FSHD mutation has a normal role in suppressing gene expression from the remaining copies, and that expression of a gene in these copies called DUX4 might cause the disease. The problem with this hypothesis has been that researchers could not find any evidence that DUX4 was expressed in FSHD or in unaffected individuals.

Two recent publications now show expression of DUX4, or parts of DUX4, in FSHD and provide new support for this model of how the FSHD mutation causes muscle disease. Yi-Wen Chen at Children’s National Research Center in Washington, DC has reported evidence that DUX4 is expressed in FSHD muscle, and our group centered in Seattle has confirmed the expression of RNA from the DUX4 region and also showed that the RNA encoding the DUX4 protein is rapidly chopped-up, which might explain why it has been difficult to find in the past. Both our group and Michael Kyba at the University of Minneapolis have also shown that the DUX4 protein, or parts of the DUX4 protein that might be made from the chopped-up RNA, are toxic in muscle cells. Together, these studies provide experimental support for what has always been the most rational and attractive model of how the FSHD mutation causes a disease.

If other groups can confirm our findings, and those of Kyba and Chen, then perhaps a new scientific consensus will develop in the research community. A generally accepted model for how the FSHD mutation causes disease will facilitate research proposals designed to find therapeutic interventions and will generate sufficient agreement in scientific review groups to make these proposals competitive for funding. This would certainly result in a new and better era for FSHD research, made possible, in part, by the support of the Friends of FSH Research.
Posted by fshfriends at 4:11 PM