Needed: The Guy in the Big White Hat 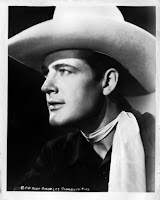 Living with FSH has many manifestations - some people are able to perform the various activities of daily life without too much inconvenience or discomfort, those are the lucky ones. Although there are some cases of infantile FSH, the majority of those with FSH Muscular Dystrophy experience muscle losses and weakness by the time they are teenagers or in their early 20's, here is one person's story-

When I was a kid I used to watch Gilligan’s Island. I always was impressed with how Gilligan could raise his arms straight up in the air when surrendering to a whole host of people and animals on various episodes. He always seemed to have a special talent. It was only later that I finally determined that what he could do was not at all special, but was in fact a normal trait. But that was not until after, as a teenager, I began to consistently stub my toes while walking, then discovered that suddenly I could no longer walk on one heel, then not on either, as groups of muscles seemed to give up. This made it quite difficult to pursue my favorite pastimes of soccer and cycling, as I eventually could no longer run or even balance on a bicycle. I eventually was informed that I had the genetic markers and clinical symptoms of FSHD, the third most common form of muscular dystrophy. As a cure I was offered a pair of shoes with Velcro straps and springs. It was the late 1980’s, and I felt at the time like I was in the 19th century rather than the 20th. I quickly realized that any disease named based on symptoms rather than causes is a disease that no one has a clue about.

I was fortunate enough to have become enamored with an occupation that provided enough earnings to not only save for my adopted daughters’ education, but also to directly fund researchers working on the mystery behind this disease. It was not much, at least compared to what an organization like the MDA could muster, but the researchers that I corresponded with were very appreciative of the funds. Over times my extended family has spent close to a million dollars directly on research, and brought together what we have found to be the best and brightest to share their insights. They have discovered amazing things, and have continued to get closer to a cause for this very life-altering disease. But we just don’t have the resources. We try to ensure that every penny is spent wisely, but there are not enough pennies.

So we need help. We need the resources of our government, stretched as they are at this time, to help close in on the answer, to find a cause, to play the part of the guy with the big white hat.

Things can continue as they are, slowly making progress as funding permits, allowing good researchers to go elsewhere as they give up on obtaining grants. You can let me, and the many others like me, continue as we are. Tomorrow I will get out of bed, because I am still able to do that, and even brush my teeth and take a shower myself. I can still walk if I am careful, though the kids know better than to ask me to do something quickly. I’ll be making their lunches tomorrow, but I need to get up early, as it takes me awhile to get things done. Any outing now requires my wheelchair, as it would be painfully slow otherwise, and my knees have taken too many falls as it is. There are many diseases which afflict humans, many much more devastating than FSHD. But the prevalence of this disease, and the very good possibility of actually being able to determine a cause, and thus a path to a cure, would seem to make it worthy of consideration in regards to helping fund research. It is a problem that actually has a chance of being solved, rather than being a hole in which to perpetually throw funds.

Posted by fshfriends at 5:56 PM